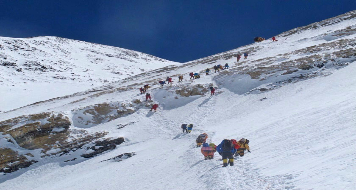 Kami Rita reached the summit on Wednesday morning with a team of foreign climbers and a fellow Sherpa guide and was already safely descending to a lower camp by the afternoon, said Gyanendra Shrestha, a government official stationed at the base camp.

Before leaving for the mountain last month, Kami Rita told the Associated Press that he wanted to scale Everest at least 25 times.

Mountaineering has been his family tradition. His father was among the first professional guides after Nepal opened to foreign trekkers and mountaineers in 1950. His brother has scaled Everest 17 times. Most of his male relatives have reached the top at least once.

Kami Rita first scaled Everest at age 24, and has made the trip almost every year since then. He has also climbed many of the region’s other high peaks, including K-2, Cho-Oyu, Manaslu and Lhotse. In the autumn, he guides clients to smaller peaks in Nepal.

Both of the other previous record holders are retired from climbing.

Apa, a 58-year-old guide who uses only one name, retired in 2011 and moved to Utah. Phurba Tashi, 47, retired from high-altitude climbing in 2013 but still works at Everest’s Base Camp helping organize expeditions.

From the Chinese side of the mountain, Lhakpa Sherpa, 44, also reached the summit Wednesday for a record ninth time, shattering the record for women she set last year.

Rajeev Shrestha of the Seven Summit Adventure agency in Kathmandu said he received a message from the base camp about the successful climb. She was making her way down to the advanced base camp, he said. She lives most of the year in Connecticut and has a son and two daughters.

Shrestha said 94 climbers reached the summit on Wednesday because of good weather conditions.

The route to the summit was opened up by a team of Sherpa guides earlier this week.

Meanwhile, a 69-year-old double amputee climber from China flew on a helicopter from Everest to Kathmandu on Wednesday, two days after climbing the mountain.

Xia Boyu is not the first double-amputee to reach Everest’s peak, but he is the oldest. He lost his legs after a failed Everest attempt in 1975.

His son, Xia Dengping, who was with him at the airport, told reporters his father is a hero.

He was taken to a hospital for a checkup but appeared to be in good condition.

More than 340 foreign climbers along with their local guides are attempting to climb Everest this month.